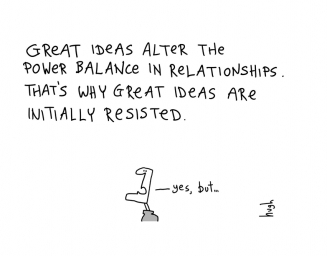 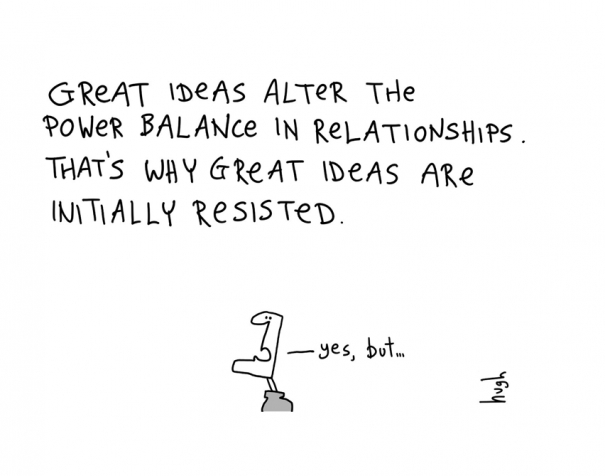 The more original your idea is, the less good advice other people will be able to give you. When I first started with the cartoon-on-back-of-bizcard format, people thought I was nuts. Why wasn't I trying to do something more easy for markets to digest i.e. cutey-pie greeting cards or whatever?

You don't know if your idea is any good the moment it's created. Neither does anyone else. The most you can hope for is a strong gut feeling that it is. And trusting your feelings is not as easy as the optimists say it is. There's a reason why feelings scare us.

Plus a big idea will change you. Your friends may love you, but they don't want you to change. If you change, then their dynamic with you also changes. They like things the way they are, that's how they love you- the way you are, not the way you may become.

Ergo, they have no incentive to see you change. And they will be resistant to anything that catalyzes it. That's human nature. And you would do the same, if the shoe was on the other foot.

With business colleagues it's even worse. They're used to dealing with you in a certain way. They're used to having a certain level of control over the relationship. And they want whatever makes them more prosperous. Sure, they might prefer it if you prosper as well, but that's not their top priority.

If your idea is so good that it changes your dynamic enough to where you need them less, or God forbid, THE MARKET needs them less, then they're going to resist your idea every chance they can.

GOOD IDEAS ALTER THE POWER BALANCE IN RELATIONSHIPS, THAT IS WHY GOOD IDEAS ARE ALWAYS INITIALLY RESISTED.

Good ideas come with a heavy burden. Which is why so few people have them. So few people can handle it.

A Word on Framing - Or, why you should let us do it for you:

Having spent your hard earned cash on a beautiful piece of art we strongly recommend professional framing.

Our limited edition giclée prints and serigraphs are printed on the best archival paper available. It is designed to last a very, very long time. We've seen clients who have taken both routes; inexpensive poster frames, which will ensure that the print will not survive the fullness of time, and top end, proper museum type framing.

We have contracted with a local framer, so that you can get a really high quality professionally framed print for probably half of what your frame shop would charge.

We frame our giclée prints using a high quality mat between the print and the plexiglass. For our larger serigraphs we make shadow box frames so that the artwork is set back from the UV plexiglass, and the artwork is floating, 'hinged' to a back board that will make it stand out and look amazing. The moldings we offer are 1" 5/8 (4.25cm) minimalist sleek black or white matte lacquered wood.

Special framing requests are welcome. Questions? email us at art@gapingvoid.com

You Need To Matter