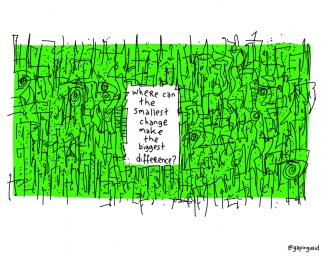 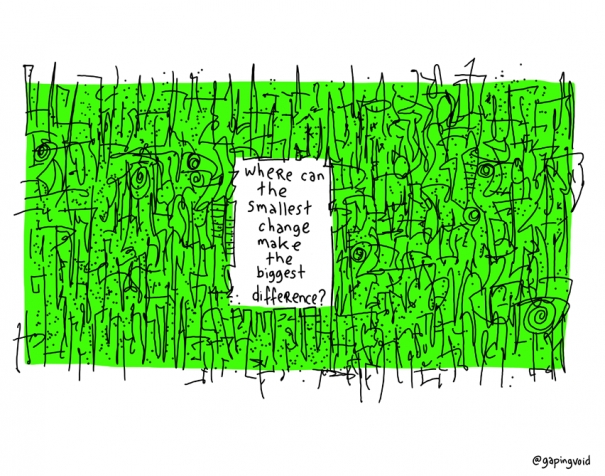 In chaos theory, they call it The Butterfly Effect. As they say in Wikipedia:

"In chaos theory, the butterfly effect is the sensitive dependence on initial conditions in which a small change at one place in a deterministic nonlinear system can result in large differences in a later state. The name of the effect, coined by Edward Lorenz, is derived from the theoretical example of a hurricane's formation being contingent on whether or not a distant butterfly had flapped its wings several weeks earlier."

Phew! A butterfly flaps its wings, a few weeks later, you get a hurricane.

Of course, it happens in real life. Small moments turn out to be big moments later on. A chance encounter in a bar or an airport lounge turns in to a great romance, friendship or business opportunity.

That’s why I like art. A simple drawing can change a life, can change many lives. I’ve seen it happen with my work, I’ve seen other people’s work affect me profoundly, even change the course of my life, just by seeing a picture in a book.

Though I admire people with the BIG idea; Bill Gates, Einstein etc. it's good to remember that small ideas can turn out to be big ones, too, if they change a life for the better, if they make someone’s life suddenly feel more “worth it”, somehow.

A Word on Framing - Or, why you should let us do it for you:

Having spent your hard earned cash on a beautiful piece of art we strongly recommend professional framing.

Our limited edition giclée prints and serigraphs are printed on the best archival paper available. It is designed to last a very, very long time. We've seen clients who have taken both routes; inexpensive poster frames, which will ensure that the print will not survive the fullness of time, and top end, proper museum type framing.

We have contracted with a local framer, so that you can get a really high quality professionally framed print for probably half of what your frame shop would charge.

We frame our giclée prints using a high quality mat between the print and the plexiglass. For our larger serigraphs we make shadow box frames so that the artwork is set back from the UV plexiglass, and the artwork is floating, 'hinged' to a back board that will make it stand out and look amazing. The moldings we offer are 1" 5/8 (4.25cm) minimalist sleek black or white matte lacquered wood.

Special framing requests are welcome. Questions? email us at art@gapingvoid.com

I Can Only Inspire You